Hello fellow 48 fans everywhere! Today i’m here to update you guys in Milky graduation which was held this week of July…

Its a very sad time of the year as one of y favourite NMB members has told everyone about her graduation in April 13, 2016 and to be honest it broke my heart. 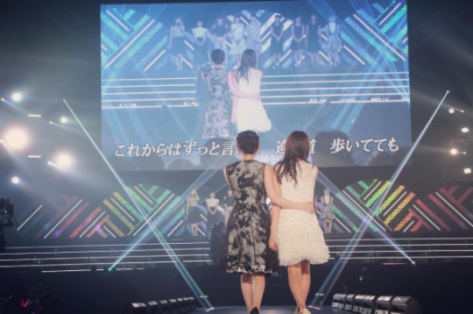 But her graduation was a success and many former members such as Yamada Nana came to sing along with Sayaka and Milky which was actually touching seeing once again the trio that started NMB48 as it was today! ❤

Her graduation song called “Yume on Nagori”was such a beautiful song and i’m very glad I could hear Milky voice once again. And her dress was actually so beautiful!!! ❤

But lets support Milky in the future and for her to follow her dream Milky FIGHTING!!!!

ALSO lets not forget CONGRATS SASSHI FOR WINNING THIS YEAR SENBATSU AND TO ALL THE OTHER WINNERS!!!!!!

Well guys I just wanted to share my personal life a bit and it’s actually been a hard road for me with all these graduation happening one by one and Rena graduation that still has effect on me that I can’t move on from even after a year. It’s kinda getting a little better but after caughting  to AKB, but alot has changed in 48 group.

It’s hard for me to look back and not cry, and i’m kinda a cry baby and I actually just miss them so much.

I don’t know how to explain this, but it’s hard to follow up on AKB with all these changes,and i’m still struggling just a bit. But don’t worry guys i’m still an AKB fan since 3 years ago, but not as hardcore as before I just need more time i guess *cires*.

I just wanted to let you guys know as some of you follow me on tumblr and you have seen some changes to my tumblr and all. BUT thank you guys so much for reading this and if you guys actually read what I wrote hahaha

BUT anyways guys thanks for reading this post and have an awesome day!

Credits to the original owners of these gifs and images on tumblr!

4 thoughts on “Milky graduation and updates”